The latest update for Black Desert is out, bringing the arrival of the Winter Season Graduation, Character Reboot, and more! Check out the details below.

● Consoles that were only be able to see the default appearance and default costumes of other characters can now toggle the option via Settings.

On December 22, 2021, certain consoles (Xbox One, Xbox One S, PlayStation 4, PlayStation 4 Slim) could only see the default appearance and default costumes of other characters. However, after collecting opinions from our Adventurers, we decided to change this from a mandatory setting into an optional one as the customization of one's character is important in MMORPGs.

● Skills of classes will be reset during the January 10th maintence, as announced through the notice: Here.
- Due to the skill reset, GM Silver will appear near the Supply Manager NPC, Robb, at the Battle Arena, allowing characters regardless of where they currently are.
- Interact with GM Silver to conveniently use Learn Skill, Skill Add-on, and Preset functions.

* Coupon and the mail the item comes in is available until January 26th.

* You cannot register the coupon once it expires. Please take note that the items stored in your Web Storage and Mail will also disappear once they expire.

* The coupon can be registered once per Family.

* Please take note that you will not be able to use the coupon for 1 hour when you enter the wrong coupon code 10 times in a row.
* You can only redeem this coupon with accounts which are linked to the Black Desert Console Website

How to Link Accounts 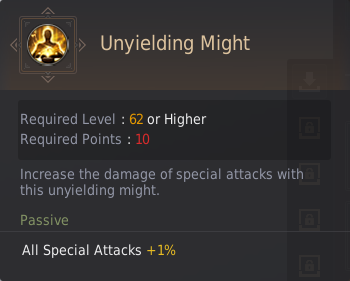 ● Added Unyielding Might, a passive skill you can learn once you reach Lv. 62.

● Added the "Class Damage Ratios" to the Adventurer's Guide categories so that you can check the damage rate applied for each class when each class attacks its enemies.

* Increased the amount of damage applied by 34.09% when Shais attack Ninjas.

- We are planning to make constant updates when a new class is released so that you can now check the damage rate via the Adventurer's Guide.

● Changed to apply an upper limit or a lower limit for the increase and decrease in Movement Speed, Attack Speed, and Casting Speed that can be applied all at once to your character (With the assumption that your character's default speed is at 100%.)

- Changed to get up to a total of an extra 150% for Movement Speed, Attack Speed, and Casting Speed that increase with buffs, enhancement levels, and skill add-ons.

* Therefore, the maximum stats for your character's Movement Speed, Attack Speed, and Casting Speed are 250%.

- Changed to apply a total of up to 50% for the stats for Movement Speed, Attack Speed, and Casting Speed that decrease due to debuffs.

* Therefore, the minimum stats for your character's Movement Speed, Attack Speed, and Casting Speed are 50%.

* Therefore, only up to 50% will be applied for decrease in Movement Speed, Attack Speed, and Casting Speed even if you can get more than 50%. 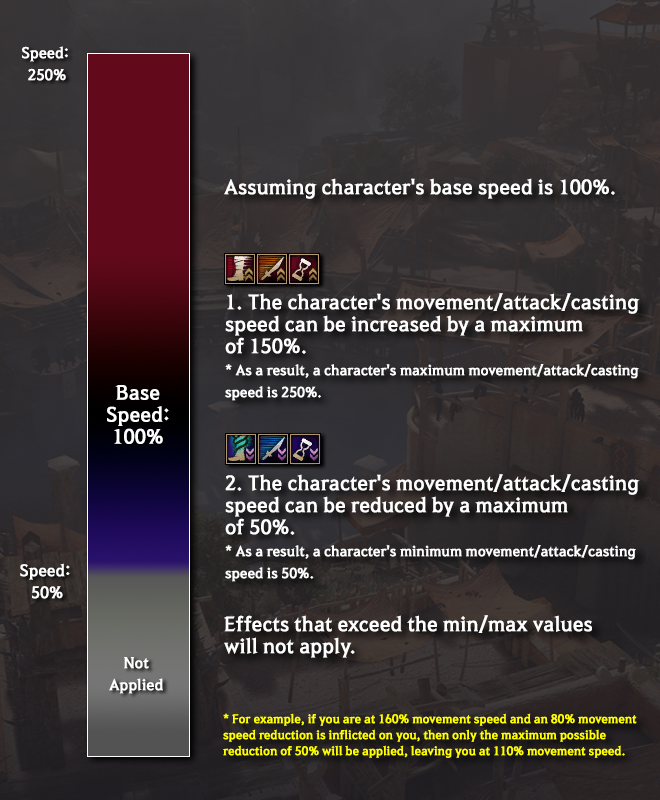 ● Changed to apply up to Resistance +80% in PvP and changed Ignore Resistance to ignore starting from the +80% Resistance applied in PvP. 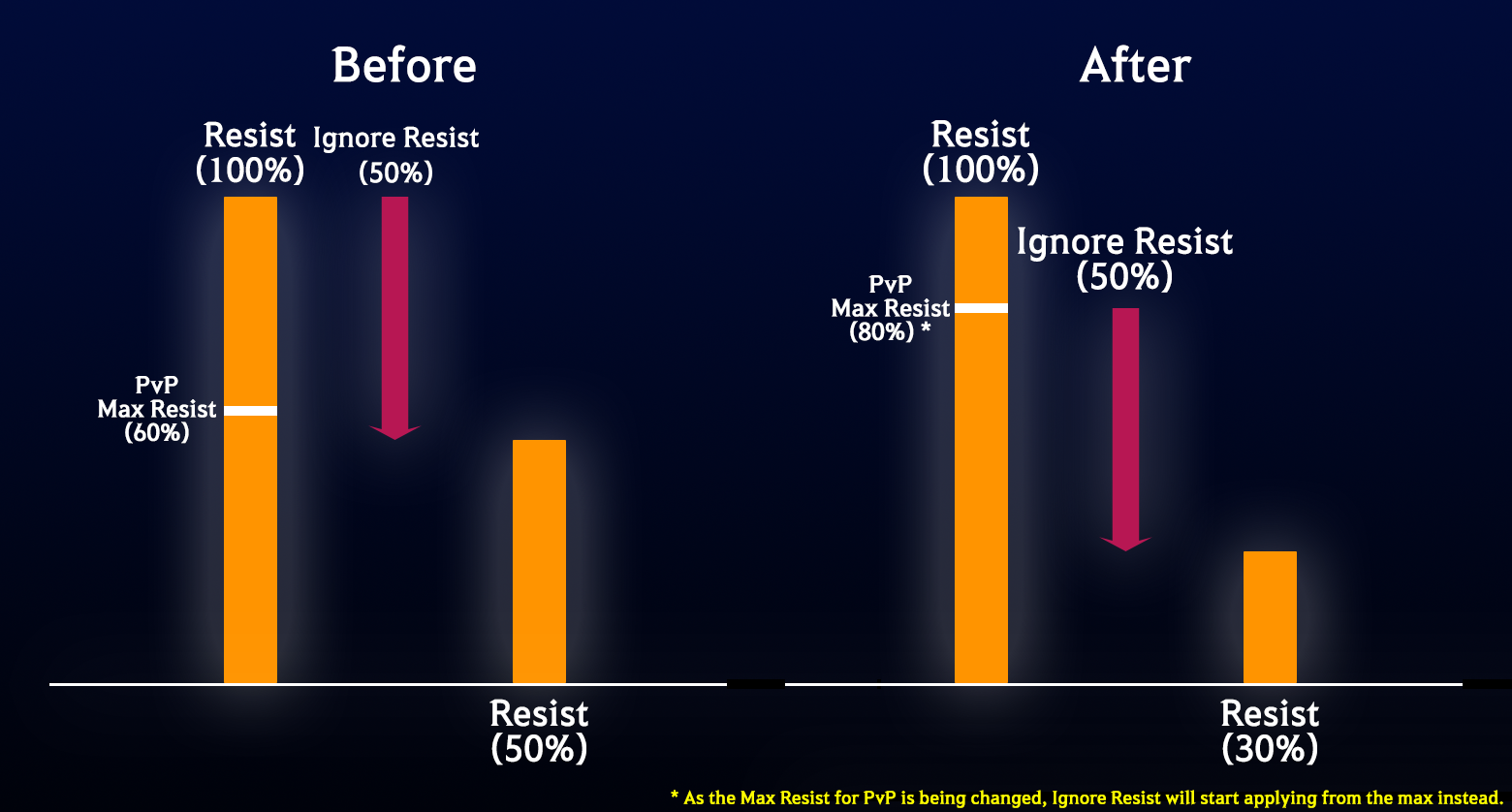 ● Made changes to the grab skills for all classes as follows:

● Changed for all classes to have "No Guard Gauge recovery" and display a guard break motion in s-block or Guard skills.

● Changed the rules for the AP applied to summons.

● Reduced the CC points of Knockback skills from 1.0 point to 0.7 point.

● Alleviated the issue where the falling motion would be displayed in certain topography while using a movement skill.

● Please refer to the following notices for more information.

● Pre-season for Conquest War has ended.
- Therefore, all current Conquest regions have been reset.

● Fughar has begun helping Season+ characters graduate and adjust to the normal server with the Season+ Graduation.

- The path to graduating the Winter Season is as follows:

- The season character will convert to a normal character when using the Honorable Adventurer's Certificate.

- You can obtain the items [Season] Tuvala Conversion Stone Box, Gift Box Full of Memories, and Fughar's Letter of Encouragement by completing the quests above.

● The ‘[Season Special Gift] Dreaming Beyond Auroras’ has been added, which will reward you with special items.

- The item "Seasonal Special Gift Exchange Coupon" mentioned above can be exchanged for 1 of the 5 special reward groups available through the NPC Fughar.

* However, if you already obtained an item from a previous season, you cannot get another item from that season.

- The item "Seasonal Special Gift Exchange Coupon" can be used after Season+ ends to exchange it for a special reward.

- Adventurers that have yet to obtain some of the previous season special rewards can obtain them by completing a season server in the future.

※ You can only receive rewards from each group once.

● You can exchange Tuvala Gear for Boss gear through the quests below once you have the ‘[Season] Boss Gear Exchange Coupon’.

- If you visit Fughar with the ‘[Season] Boss Gear Exchange Coupon’, you can proceed with the following quests. You cannot pick up another quest from Fughar until you have completed the quest.

● Carried out optimization on the Party UI

● When deleting characters below level 45, or Trial Characters, the waiting time has been reduced to 3 minutes.

● Absolute: Blizzard – The snowstorm which is produced by the skill has been modified to appear more naturally.
● Resurrection is now able to be used.

● The following skills have been modified to apply their intended status effects when used during mounted combat.

● Fixed an issue where linking Prime: Boulder Crush with Fierce Disdain would hit more than intended.

● Made changes to the following skills:

● Omua's Objurgation - Changed the falling speed to appear more natural when the skill is used on a slope.

● Sturdy Step - Improved to combo into other skills more smoothly after using it.

● Made changes to the following skills:

● Guard - Changed to be unavailable when the Guard Guage is 0.

● Searing Fang - Changed to apply its max hits in its entire area of effect.

● Searing Fang - Fixed the issue where comboing into Fierce Disdain during the skill activated Flow: Suppress.

● Searing Fang - Improved to combo into certain skills more smoothly after its attack 1 and 2.

● Flow: To Ashes - Improved to combo more smoothly into Glorious Advance after using it.

● Fixed an issue where after learning Core: Collapse, Aal’s Dominion would be activated before Silent Breach.

Hashashin Awakening’s movements appeared much heavier compared to his Succession. However, compared to how much slower he was, his skills didn’t feel that much more powerful. Therefore, we improved his Awakening by distinguishing its features to show a different kind strength from his Succession. We improved Constriction, which is only available in Awakening, increased the power of the slower skills like Ensnaring Sands and Serpent's Coil to keep his Awakening’s uniqueness but maintain the characteristics of Hashashin.
● Pilgrim of the Sands - Changed the effects gained at all levels of the skill.
- The other passive skill (Savior of the Sands) and the effects that can be obtained by leveling the skill were folded into Pilgrim of the Sands.

- Improved to activate the skill immediately as a combo after using another skill, regardless of the hand that is holding the weapon.
* However, this excludes skills that it could not be comboed with previously like Aal's Grace, Ensnaring Sands, Flow: Condemnation, and Flow: Voracity.

● Dune Slash - Changed the damage and cooldown of the skill to the following:

● Collapse III - Adjusted the damage reduction in PvP from -54% to -45%.
● Collapse - Added the All Evasion Rate reduction effect.
● Collapse - Changed to apply to all targets regardless of the attack 1 range.
● Ensnaring Sands - Made the following changes:

● Flow: Sand Warp - Changed to activate all the attacks of Retribution when comboing into it after using Flow: Sand Warp backward.
● Flow: Hourglass of Recall - Changed to apply "Invincibility → Super Armor" during the skill.
● Flow: Condemnation - Changed the damage reduced in PvP from -45% to -40%.
● Silent Breach - Made the following changes:

- Changed the command for the skill from "LS↑+LB/L2 during certain skills" to "A/X during other skills".
* Therefore, Silent Breach will take priority in activating during all Awakening skills over Aal's Dominion.
- Increased the attack range.
- Changed the damage to the following:

● Serpent's Coil - Made the following changes:

- Removed the "reduce All Accuracy Rate on hits" effect.
- Changed to not consume Stamina while holding the skill.
- Changed to no longer be able to use repeatedly and adjusted the damage accordingly.
- Added the increase All Evade for 5 sec effect.
- Increased the area of effect.

● Flow: Voracity - Made the following changes:

- Improved to be able to activate quicker at the start of Serpenet's Coil.
- Increased the area of effect.
- Change the damage to the following:

● Crown Kick - Made the following changes:

● Retribution - Adjusted the damage and damage reduction in PvP to the following:

● Quoratum's Aura - Changed the effects gained at all levels of the skill.

- The other passive skill (Quoratum's Adjuvant) and the effects that can be obtained by leveling the skill were folded into Quoratum's Aura.

- However, Succession: Quoratum's Protection was not changed.

● Quoratum's Guard - Changed to be unavailable when Combust Life is learned.
● Combust Life - Added the Super Armor for 10 sec effect that used to be applied by using En Garde.

● Ancients' Wisdom - Changed the effects gained in all levels of the skill.

● Prime: Overdrive - Made the following change:

- Reduce the cooldown of Reset by 5 sec instead of Prime: Optimization when Overdrive is stacked 10 times.

● Fixed an issue where the skill description for the ‘Pirate’s Life For Me’ did not show the full skill effects.

Succession Corsair could remain protected with Invincibility effects by continually comboing her mermaid transforming mareca skills and deal tons of damage at the same time. Thanks to this combination of protection and damage, which gave her a rather huge advantage over other classes, we decided to adjust her accordingly. While she retains her powerful damage, her Invincibility window has been shortened so that Corsair will need to be more strategic with her skills.
Main Weapon, Succession

● Sword Song - Changed the effects gained in all levels of the skill.

- The other passive skill (Cap'n on Deck) and the effects that can be obtained by leveling the skill were combined to Sword Song.

● Changed the defensive effects when using the following Mareca skills so that Invincible is applied only when Corsair is underwater and Super Armor is applied in all of the other situations.

- The Slippery Scallywags effect applied when casting an Awakening skill.

● Changed the Damage Reduction Rate in PvP from -40% to -60% for all the Slippery Scallywags that appear when casting an Awakening skill.

● Changed so that you cannot use the Item Copy and Single Copy functions with a character that has Karma below 0.

● Changed so that the sound from Grace Lauren's voiced dialog and base dialog wouldn't overlap during the Atoraxxion main questline.

● Fixed an issue where the titles of the Season Pass objectives could exceed the UI.

● Fixed the issue where the Navigate function would activate even when selecting a completed objective.

● Fixed an issue where the ordering of the Chat Groups was incorrect.

● Fixed an issue where the character portaits in the Party window UI looked abnormal.

● Changed so that you can always press the Copy button when using the Item Copy UI.

- However, when you are not able to use the Item Copy function, you will get a notification on when you can use it.

● In the Pet Exchange UI, the skills that can be learned through the exchange will now display the odds of obtaining said skills.

● Fixed an issue where character’s feet would sink under the floor when in the corridor of the 2nd floor of Epheria 2-5 residence.

● The horse icons shown in the stables have been improved.

● Fixed an issue where the minimap would display incorrectly in certain locations of the Blood Wolf Settlement area.

● Fixed the exposure of abnormal graphics which displayed with the Sweet Dreams outfit.